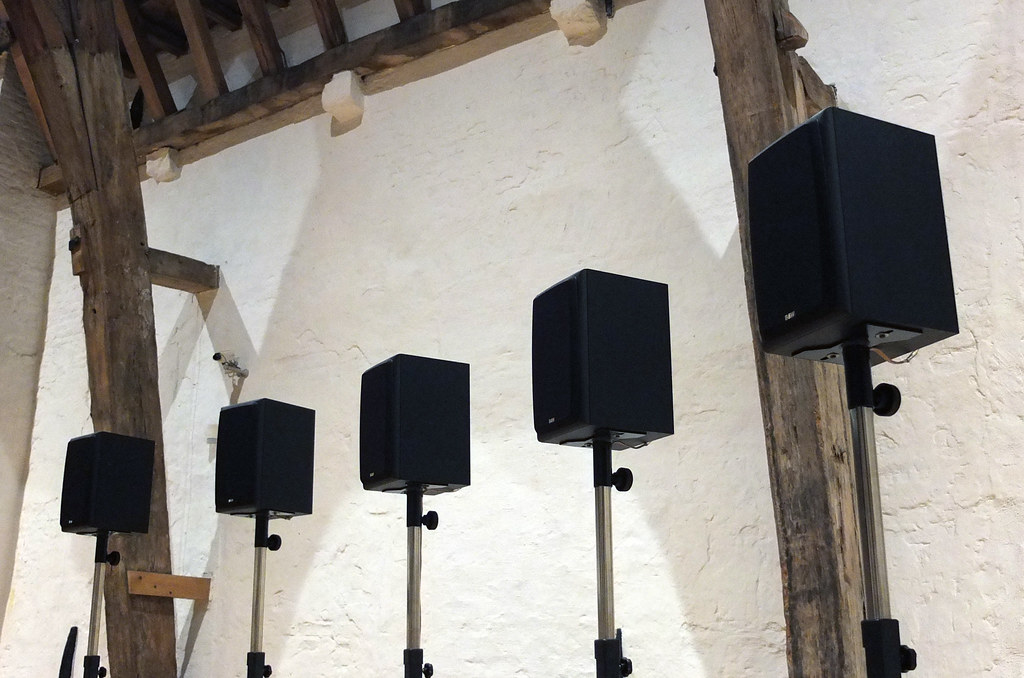 Walking around the Sint-Janshospitaal Museum in Bruges choral music played in the background. It felt like an apt and pleasant accompaniment to our visit.

Heading up the spiral staircase to the first floor the singing became louder and the steps underfoot shook a little. The music filled the whole floor. We were pleasantly surprised to find an installation called ‘The Forty Part Motet’ by Canadian artist Janet Cardiff.

The beautiful choral song ‘Spem in Alium Nunquam Habui’ by Thomas Tallis played from forty loud speakers in a circle. Each speaker represented one member of the choir from Salisbury Cathedral.

To look at the piece it was stark, modern and colourless. However the music was full of warmth and depth. When standing in the middle you are engulfed by stereo times forty, to walk up to an individual speaker you could ‘stand under the nose’ of each singer. I found myself quickly moving from speaker to speaker, experiencing the complexity of the composition and listening to each different contribution to the piece. It was great fun to run around passing the speakers, chasing the voices.

After eleven minutes the piece finished and then I realised the break had been recorded too. Choral members chat amongst themselves, practice scales, and clear their throats, readying themselves for the next recording. It seems silly now but the modern day chatter took me by surprise.

I was moved and delighted by it, we stayed to listen to the piece three times. We could have spent an afternoon there and it would have sounded different each time and just as magical as the first moment we walked in.

The piece was originally exhibited at the Baltic, Gateshead, not far from home, but we were lucky to stumble across this on holiday, in a special setting and experience it with no-one else there.